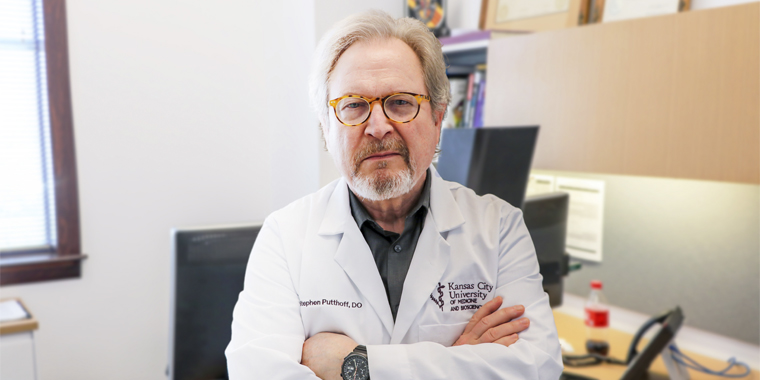 Stephen Putthoff, DO (COM '78) incorporates a catastrophe into the classroom.

On February 28, 1993, federal agents with the Bureau of Alcohol, Tobacco, Firearms and Explosives (ATF) arrived at a compound outside Waco, Texas. Their goal was to take David Koresh, a relatively unknown leader of a religious sect, into custody without incident.

That did not happen.

In the 51 days that followed, the world watched as tension between federal law enforcement and members of the religious flock grew more intense. After the violence of the first day, the standoff simmered between federal agents and the Branch Davidians. The standoff finally erupted again on April 19, 1993, when authorities fired tear gas into the compound. Three separate fires quickly consumed the entire facility. Inside, more than 70 men, women and children would perish.

This year marks the 25th anniversary of that tragic chain of events, and a made-for-television series about Koresh and the Branch Davidians has recently renewed public interest; for some, however, the fire at the Waco compound seared in more personal memories.

Despite the passage of time, Stephen Putthoff, DO (COM ’78), KCU professor of pathology, remembers the days, weeks and months that followed in great detail.

“I’ve done a fair number of multiple fatality cases,” Dr. Stephen Putthoff said. “This was certainly beyond what most medical examiners have to deal with.”

At the time, Putthoff was the chair of the department of pathology, anatomy and DNA/identity at the University of North Texas (TCOM). He also performed autopsies as a deputy medical examiner with the Tarrant County Medical Examiners District (TCMD) just north of Waco. A major forensic office, TCMD is often contracted by other counties like McLennan –where the Branch Davidian compound was located– to provide forensic support and conduct post-mortem examinations. As such, Putthoff was called on to help identify victims and perform autopsies by Dr. Nizam Peerwani, the TCMD chief medical examiner and faculty member at TCOM Pathology department.

FIRST ON THE SCENE

In a straight-forward, matter-of-fact style, Putthoff recalls the details of his role inside the compound. “You have to be able to emotionally detach yourself,” Putthoff explained. “If you don’t, you’re no good to that child or body, or anybody else to acquire justice for them.”

Putthoff recalls being one of the first officials to enter the scene with Peerwani following the fire. Putthoff was no stranger to conducting autopsies. He also had military experience—he joined the U.S. Army after high school as a Special Forces medic during the Vietnam War. Despite his experience, Putthoff faced the challenges of what he describes as “a relatively big compound building that had been reduced to ash.”

THE CHALLENGES INSIDE THE COMPOUND

Underneath the smoldering ash remained an arsenal of artillery stockpiled by the Branch Davidians. Everything from massive amounts of bullets to grenades, kerosene and propane gas was buried at the scene. Putthoff remembers that the residual heat would even spark “occasional explosions.”

Authorities spent a week attempting to locate remains of the victims, many of them women and children. Putthoff described orange plastic flags scattered throughout the compound, which indicated the location of human tissue. He believes the intense heat from the fire made it impossible to locate every person.

“The goal with something like that was to identify bodies and try to preserve them for information to determine cause, manner and mechanism of death,” Putthoff explained. “That is the task of the medical examiner.”

It took months to identify the victims and conduct autopsies. Putthoff said some remains were so severely burned and “comingled together in an agglutinated mass” that they were unable to be identified.

Another challenge was the fact that many of the Branch Davidians came from other countries. Putthoff said, “Dental x-rays or other forms of identification including relatives for DNA studies weren’t always accessible.”

The scope of the investigation involved many local, state, and federal agencies. Putthoff is quick to give credit to others who helped in the work such as anthropologists from the Smithsonian Institution and volunteers from the University of Tennessee Anthropology Department.

“Every one of us may be confronted with mass disaster,” Putthoff said. “Part of that is discussing how to approach a mass disaster and how you begin to organize it.”

Today, he often shares his experience with medical students during his forensic science seminar presented in the Mechanisms of Disease II course. His work after the Waco Siege added a layer to Putthoff’s experience, and his lectures now benefit from the unique lessons he learned from it.

“His lecture was the first time I actually heard what you can do in the field of pathology,” said second-year medical student Meera Raghavan. “It piqued my interest.”

“He’s so brilliant,” said Amanda Hersh, DO, KCU instructor in primary care. Today, they teach together at KCU, but Hersh first had Putthoff as her own professor during her studies at Rocky Vista University College of Osteopathic Medicine.

“He was a pathologist, he was in Special Forces, he was a medical examiner, and now he’s sharing his knowledge and experience with students,” Hersh said. “To me, he’s the gold standard.”

Throughout his career, Putthoff estimates he’s conducted as many as 6,000 autopsies, though he stopped performing them ten years ago.

“It does take an emotional toll,” Putthoff said.

Putthoff first became interested in pathology early in his career while serving in the Army. Now, several decades later, he says he continues to be energized by it and enjoys sharing knowledge and experience with the next generation.

“Pathology is the perfect field for somebody who wants to understand diseases, disorders, neoplasms of human beings,” Putthoff said. “I’ve never regretted going into pathology. It’s been a great career.”

Throughout Dr. Puttoff’s career, his work had evolved from military to academia and after the Waco Siege added a layer to his experience. His lectures and students now benefit from the unique lessons he learned from it.