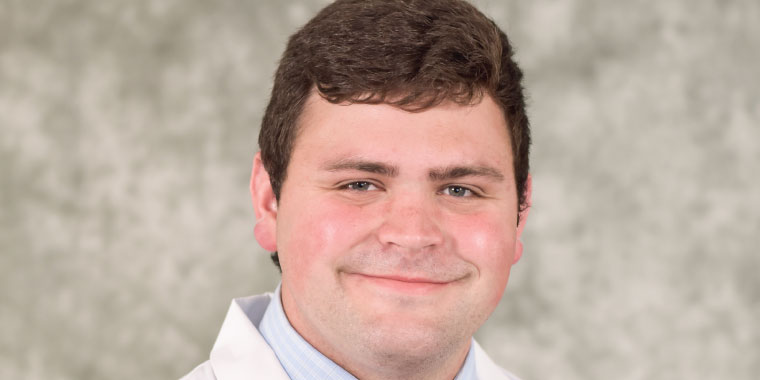 Student doctor Tanner Riscoe, OMS I, has been unintentionally following in his father’s footsteps since high school. A Joplin native, he grew up watching his father care for patients over the years. Riscoe began his career in health care working as a medical scribe in the emergency room at Mercy Hospital, Joplin’s temporary building, where his father, Dr. James Riscoe, also worked as a physician. He’s now attending medical school in that same location as part of the KCU-Joplin inaugural class.

“This building means a lot to me. My first job, right out of high school, was in the ER. My elementary school is nearby—you can see it from the campus,” said Riscoe. “I was very excited to be accepted and drove by to see the changes as the school was constructed. The sheer amount of resources that went into creating the school is amazing.”

Riscoe’s mother, Kathy, suffers from rheumatoid arthritis which also inspired him to become a physician. “Seeing the development of her disease and how it has affected her life sent me down the medical school path. She’s tried a number of different treatments, but they’ve only brought moderate relief,” he said. “I’ve used some of the OMM techniques on her and it does seem to bring some relief to her pain.”

Two experiences also significantly contributed to his decision to become a doctor. When a catastrophic earthquake hit Haiti in 2010, Riscoe saw the news reports of the destruction and knew there was a great need for help. Together with his father and members of the community, he traveled to Haiti to provide much-needed medical care to the victims of the disaster. A year later, the city of Joplin was devastated by an EF-5 tornado. Riscoe and his father sprang into action to help their hometown; they assisted with establishing a basic triage center at Memorial Hall, and a secondary triage center at McAuley High School for the walking wounded. In the hours following the storm, father and son worked alongside local off-duty nurses and doctors to care for those injured as a result of the tornado. “It was a pivotal point in my life,” said Riscoe. “I was touched by the outpouring of help from the community after the tornado.”

During his undergraduate years at the University of Kansas (KU), he majored in biochemistry so he could pursue a career in medicine. Yet another parallel—his father was one of the first students at KU to major in biochemistry, a new major at the time. After graduation, Riscoe was thrilled to return home to attend medical school. “It would be a dream come true to stay in the area and practice medicine,” he said. “Joplin is a great place to grow up and raise a family. For me, there’s no place like home.”

Regardless of his eventual specialty, he strives to be deeply involved with the community. Riscoe looks forward to developing relationships with patients whether he cares for them for a short time in the emergency room or over the years as a family doctor.