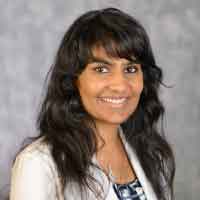 Growing up in Houston, Texas, as the daughter of a physical therapist, Maaheen Ahmed was inspired at a young age to pursue a career in health care. She watched her mother treat, heal and improve people’s lives with skill and compassion. One of her mother’s patients had a particular impact on Ahmed. She was a local hair stylist who developed a sudden case of frozen shoulder, a condition that leads to pain and stiffness in the shoulder joint. This woman had been cutting Ahmed’s hair since she was two years old but now was unable. “I watched my mom work with her until she was able to regain full use of her shoulder,” said Ahmed. “It really compelled me to choose medicine. The thought of being able to help someone like that just moved me.”

Maheen explored which health profession to pursue and decided on becoming a physician. From that moment, Ahmed was on her path. She enrolled at the University of Texas in Austin where she earned a degree in Anthropology. She admits that’s not the usual track a pre-med student takes but she wanted to do something different; something she enjoyed and was also passionate about. Upon graduating, Ahmed worked as a pharmacy technician where she learned about dispensing medication and gained valuable experience working with clients.

After taking the Medical College Admissions Test (MCAT) exam and applying to schools, Ahmed began interviewing with various medical schools. Her cousin was familiar with KCU and suggested Ahmed make the trip to check it out. So, she did and said it was the best decision she could have made. “The connection was immediate,” Ahmed recalled fondly. “I fell in love with the school, the programs, the peer tutors – I knew I belonged there.”

Ahmed is currently a fourth-year student completing her clinical rotations – one of which led her back to Texas at Baylor University. During her time in Texas, Hurricane Harvey hit and devastated the Houston area. Knowing her parents, grandparents and cousins, still in Houston, were in danger, Ahmed immediately took action. She made her way to Houston to be with them during the difficult time and has returned every weekend since to volunteer. She has cleaned out water-ravaged homes, assisted in preparing for new construction, and even participated in rescuing and reuniting pets with their owners.

Ahmed will graduate from KCU in May of 2018 with a DO degree from the College of Osteopathic Medicine, a MS from the College of Biosciences and an Anatomy Fellowship. She said she is excited for the next phase of her life and knows she belongs in medicine and is thrilled she’ll be able to help others just as her mother did.