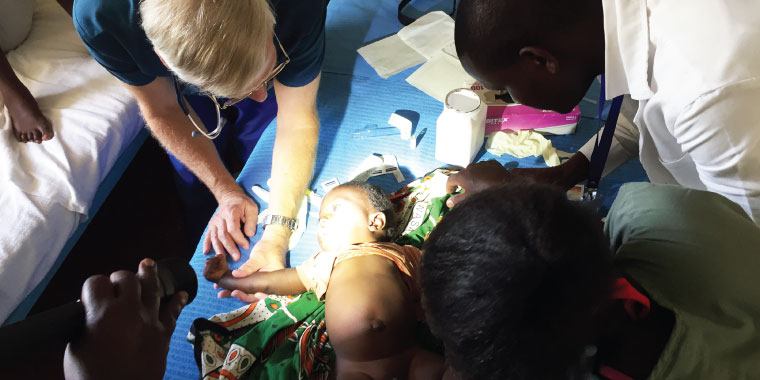 A dramatic moment during a KCU global health trip to Kenya: a mother sat down in front of student doctor Elizabeth Von Ende as the woman’s 5-month-old baby boy went into a full blown seizure.

Von Ende immediately called the supervising American and Kenyan doctors for help. The medical team worked with precision as the boy named Peter writhed on the bed, his eyes staring off into the distance. The seizure and a fever of 105 degrees told them baby Peter was suffering from cerebral malaria that was affecting his brain. A blood test confirmed it.

Peter was just one of dozens of malaria cases the 10 KCU students treated during their three week trip to a remote area of Kenya working in The Mama Pilista Bonyo Memorial Health Center. They treated so many patients they ran out of rapid testing supplies and needed to purchase extra medication.

As Von Ende said, “It was pretty intense.”

Malaria is a deadly parasitic infection spread by mosquitoes. While travel and immigration have increased the prevalence of the disease in the west, Africa experiences the worst of malaria worldwide.

According to the World Health Organization, the majority of the 420,000 people who died of the disease in 2015 were young children in Africa.

Von Ende developed an admiration for the people of Kenya who endure the disease day in and day out, calling the kids “crazy tough.” She treated seriously sick children who arrived without parents, and those who walked miles with high fevers just to get to the clinic. “I feel so connected to these patients,” Von Ende explained. “They listen to everything you say and they are grateful to have us there.”

If baby Peter’s mother had waited just a few more minutes to seek treatment, her child would have been dead. But the KCU and physicians were able successfully treat him. After one night in the clinic he went home with his mother and a full course of medicine.

“I’m happy that KCU students get the chance to become proficient at diagnosing malaria, as it is not as frequently seen in the United States." said Gautam Desai, director, KCU Honors Track in Global Medicine. “By the end of the outreach to Kenya, each of the students had diagnosed and treated malaria, and saw just how ill patients could become who have that disease.”

Desai says he is also happy there is good news on the horizon. A vaccine will be tested in Kenya next year that could help hundreds of thousands of people.

Until a vaccine is found, KCU student doctors will be treating as many people as possible and saving as many lives as they can.